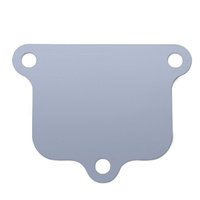 Notify me when back in stock

2. Made from 304 grade Stainless Steel

3. One fits on the exhaust side of the gasket of the EGR pipe from the exhaust

4. One fits on the exhaust manifold side of the gasket on the EGR Cooler flange

6. It is recommended to be used in conjunction with both plates, and in condition that if you want to remove the EGR Cooler completely

Benefits of Blocking the EGR system:

1) Blocking the EGR will stop the carbon particulates from the exhaust clogging up the inlet manifold.

2) Blocking the EGR Cooler at the exhaust manifold side keeps 100% of the exhaust pressure driving the turbo, which means the turbo will spool up quicker and the engine will produce more power from the same amount of fuel.

4) Less engine oil contamination. Many carbon particulates that enter the air intake through the EGR system find their way into the oil system. This will eventually clog the oil galleries and greatly increase engine wear.

* Stop soot from the exhaust clogging up your inlet manifold.

* It redirects it all back out through the exhaust, where it was supposed to go.

* It also results in cleaner engine oil, which in turn prolongs the life of the engine and gives better fuel economy.

* It also causes the turbo to spool up faster and sooner.

This product fits the below vehicles. Please check that your vehicle is in the list before purchasing: