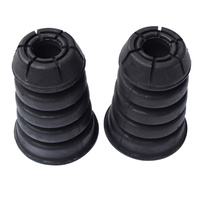 Free pick-up from store - $0.00
Pickup is available in our warehouse at Unit E, 19-21 Loyalty Road, North Rocks NSW 2151 between Monday to Friday, 9am to 4pm except public holiday. Order normally will be ready within 1 business day and we will send you an confirmation email to notify you the part is ready to collect after your order is placed. Please have your order number ready before you come to our warehouse. If you need any parts urgently after you place order and would like to contact us directly to speed up the process of your order, please contact us at 02 7801 4933 or email us at sales@machter.com.au.

Notify me when back in stock

Description : Factory style mounts to suit a Landcruiser 80 Series . 'Bolt In' Rear Progressive Extended Bump Stop Kit For your Nissan GQ AND GU Patrol. Commonly used for extending the bump stop length on Nissan Patrol and other application. Approx 30mm Longer and are suited to a 3" Lift. They will also suit a 4" lift but The bump stops will most likely need to be extended on the diff as well. it depends on the shock absorber, and is up to the installer to check the dimensions before instalation. They mount the same as a Genuine Patrol Bump Stop Except insetad of having a thread in the top plate, they have a hole for a Bolt to go through. These bump Stops are a Progressive Bump Stop, Meaning as you start to compress they get firmer. The result of this is that they can be Longer, So they start working sooner, whilst working to give you a smoother ride.

This product fits the below vehicles. Please check that your vehicle is in the list before purchasing:

Help those affected by bushfires